I recently watched a Johann Hari Ted Talk. If any of you have read his material or listened to him speak, you know he’s quite a controversial journalist. He tends to deliver more a less a pitch for a specific concept that lay on the outskirts of the status quo.

It’s not that his ideas are new, but he has a knack for delivering old ideas in a fresh and attractive presentation.

Like a Gordon Ramsey of ideas. Well, maybe not that awesome but you catch my drift.

The idea during this particular talk (link below) was on the new healthcare approach termed social prescribing. Which is more or less prescribing social interaction – kind of like an Alcoholics Anonymous type fellowship for anyone and anything.

It may sound silly. It may sound so incredibly obvious that the fact a doctor has to prescribe just shows the level of decay of our society. At least this concept is starting to really gain traction in the West, particularly with our neighbors across the pond.

No Man Is An Island

The majority of causes for depression and anxiety have very little to do with biology and everything to do with sociality.

Hari actually cites only two primary forms that are predominantly biological but even then there is an obvious cross over and variance due to humans being more than mere biological machines.

We are also mental, emotional, spiritual, and social. Perhaps a neglect of these latter components is what is darkening the consciousness of so many earthlings.

In the talk he notes that in the western individualized world we’ve become the loneliest folks to have ever existed.

Bold claim, but it’s hard to envision anything otherwise with our gross consumerism, total castration of the family nucleus, and unrelenting competitive marketplace (that exists in the bazaar as well as our hearts). So, let’s just accept it prima facie.

A Man Without A Tribe

Additionally, he stated something that resonated with me on every conceivable level – seriously, it made my pinky toe twitch (a very good sign I assure you).

The claim was this: the modern human being is the first-ever in history to be “tribeless.”

I feel like I’ve been saying this for years. Likely far less imaginative and eloquent as Hari, particularly by failing to cite any reference or mark any support whatsoever (cue Alicia Silverstone in Clueless with an “as if!”).

But I’ve been saying it!

In his book, Lost Connections, Hari notes nine different factors or causes which contribute to depression, two of which are biological as I already noted (genetics and actual physical changes in the brain) and thus precluded for my purposes, and seven are psychosocial.

The seven are as follows:

That’s good and all, but the question is: does social prescribing cover all of these points?

I reckon we need something more comprehensive, more integral.

May I introduce you to Integral Theory.

The AQAL map – referring to all quadrants, all levels, all lines, all states, and all types – is a brilliant and comprehensive tool for unlocking human potentials and the cornerstone of Integral Theory.

In this article, we will simply be reviewing the quadrants and how they relate to Hari’s disconnection.

For a deeper dive into the subject click here. Various books are written on the topic and for the sake of brevity, I’m only superficially broaching the parameters. 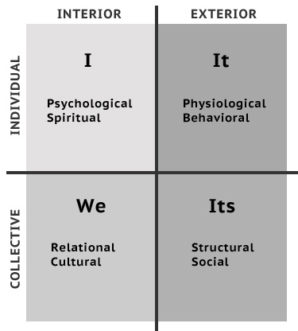 Using the above map you can identify precisely where in your life you are experiencing the disconnect.

John Dupuy, of Integral Recovery, simplifies the AQAL Map to mean my self, my body, my people, my world.

A healthy person will live in such a way that in their experience each quadrant will be targeted and interacted with.

People that live life in total unawareness – what De Mello refers to as “dreaming thinking they’re awake”- usually find themselves situated in one particular quadrant – often to the point of obsession.

The reason is that when they have an emotional issue (e.g. depression, anxiety) they organically attempt to solve it with the quadrant they already emphasize, which is why their solutions never work. So they try harder, using the wrong method with a little more gusto to get the right results.

But it’s obvious why this will not suffice.

The solution would require another quadrant. The depression/anxiety is indicating one of the sectors of our direct experience is being ignored either partiality or in totality.

The answer is holism. The AQAL map wonderfully achieves his ideal.

If an individual’s primary residence is in the upper quadrants, their focus needs to be on the lower quadrants.

These people don’t need more therapy, or more medication, they need community. They spend enough time in the circus between their ears. They need involvement!

However, there are likewise those people whose lives are situated almost entirely in the lower quadrants.

These folks can benefit immensely from study, exercise, medication, and therapy.

They socialize to such a degree that they likely talk – perhaps even curate a fundraiser – in their damn sleep.

Do you see how this works?

Sure, it’s overly simplistic, but I’m just taking a quick glance at the system to act a compass to your reconnection.

The map attempts to outline the human being holistically and provide an assessment to determine precisely where they are disconnected and how to reconnect.

For our purpose, we need to see where we spend most of our time.

Time to get out of your comfort zone.

The Three Principles of Health Realization…the inside-out revolution! I recently stumbled upon the works of theosopher, Syd Banks.  THE WORKS OF SYDNEY BANKS ==> …
Why Do Babies Smell Good? I’m sitting on the couch a few months back, reveling in the glory of a toasted pop tart and …
Christians And Addiction – The Basics Two Hearts: Orphan Vs. Sonship In his later years, Saint Augustine became rather enamored with love being rightly …

Though I run this site, it is not really mine. Rather, this basecamp is ours. It was never designed with the singular "me" but rather the plural and collective "we" -- our story, our wisdom, our sobriety. You can get sober, but together we are well on our way to SOBERTOSTAY.